hi mrs. Dolores oh this is number 2 of a
series on medical equipment you can have
in your home
simple easy inexpensive testing you can
do in your home so this is an oxy meter
a pulse oximeter so my husband had
pneumonia
it’s always my husband huh so Steven
ammonium you went to the doctors and we
realized that they were charging him $15
to put this little thing on his finger
so he says okay let’s buy them so we
paid 15 $20 for this one I’m sure
there’s better ones but this seems to
work very good it’s by contact we’ve had
it a couple months now and it seems to
be good comes with a little case if you
want a little case to put it in the case
can hook different hawkship and hook the
case on it I think you can actually I
guess you just hooked the case on it so
anyway nurses are whenever can hang it
around their neck and carry it around
with them so I guess different people
have different oxidation in their blood
and I had a nurse when I was sick say to
me that you know I’m I was like 97 and
she said Oh hers or hers is like 96 all
the time so I just have to use it a
little while you get to know what did
she be so all you do to use it you
should turn it on you get those little
lines stick your finger in there and you
just let it sit and it says it takes I
don’t know two minutes or something like
that to work and it’s basically for
peace of mind so okay what is that
now it’s saying I have a 90 90 oxygen
level at 92 pulse well that doesn’t look
real good does it yeah try that again
dolorous freaks out online about her
oxygen level
this might be a blooper to go because
now it’s not even working you know this
thing has worked 100% of the time all
right
hmm okay so now it says my oxygen levels
99 all right maybe I don’t know how to
do it
try number three on the oxy meter that
looks at them right Liz it’s a 96 on the
oxygen 107 on the pulse okay so that
looks about right I guess I just didn’t
have my finger and I never put my finger
into myself husband always jabs my
finger in it so anyway it’s a good
little gadget I don’t know it’s fun to
play with I don’t know if I found any
real use haven’t have a problem where
I’ve said oh my gosh I don’t have any
oxygen level but they charge at $15 at
the doctor’s you can do it yourself so
what’s the same as the doctors seems to
be pretty accurate my husband’s done it
here and then done at the doctor’s
office it’s been the same so that’s the
oxy meter 15 20 dollars another little
gadget that you can do at home for your
medical self see ya bye
SaleBestseller No. 1 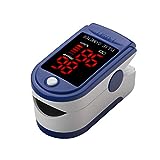 Contec pulse oximeters are available in a variety of different types such as digital, infrared, and skin probe. The pulse oximeter probes are very lightweight and are easy to use. They come with a standard adapter that will fit most of the other models with a small hole or small opening.

The pulse oximeter probes are designed to be used at home or in offices. They can be used for both indoor and outdoor applications. The skin probe allows people to get an accurate reading by touching the sensor to their skin. The other type of probe uses a laser to read the oxygen level in the blood. This probe works best for those who are already at a stable health.

The Contec also has a feature called the oxygen monitor. This is a computerized system that monitors the level of oxygen in the blood. It shows the user the readings and tells them what the percentage of oxygen is in the blood.

Because this oximeter probe has a high sensitivity to changes in pressure it is ideal for use by doctors. The level in the blood stays constant while a patient is resting or in deep sleep.

Another important feature of the Contec is that the monitor will automatically turn on if the oxygen level falls below a specific level. Since the sensor is digital, it is easy to see and monitor the progress of the patient. If the levels are still too low after an hour the machine will turn it off.

The Contec oximeter does not require any batteries and can work without a battery at all. There are many devices that use batteries but the technology are too new to provide true oxygen monitoring.

People who need help with cardiac rehabilitation may benefit from this device. It provides important information about the amount of oxygen in the blood. The Contec oximeter will tell the patient the right amount of oxygen they need.

The Contec oximeter has been designed to provide accurate readings to those who need it and it is also easy to use. This makes it perfect for those who live alone or work alone.

All information provided by CCA clients and approved by Dr. Dave Miles. Support us: Coub / ProductHunt. Last update on 2021-05-14 / Disclaimer: as an Amazon Associate a Community Clinic Association team earns from qualifying purchases.